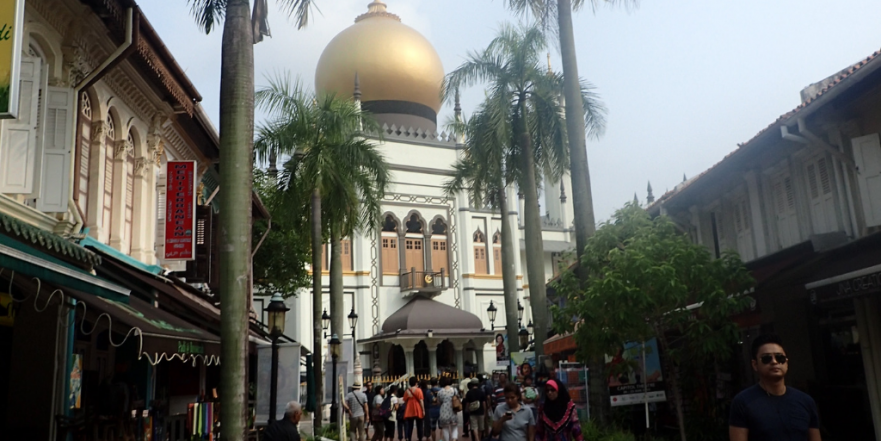 Singapore is one of my favourite countries in South East Asia. Which may shock some people as it isn’t generally a favourite with backpackers on account of how expensive it is. Don’t get me wrong, paying $20AUD for a glass of wine isn’t my idea of fun, so instead when I am in Singapore I drink less. What I do more of is, eat. There is so much amazing food and not all of it is overpriced. Singapore has a lot to offer if you know where to go, lucky for you I wrote this blog post with some cheap and easy things to do in Singapore.

I have stayed in many neighbourhoods in Singapore, but Bugis is by far my favourite. It is central, has great food (of course) but isn’t too noisy. It was for these reasons that I chose to stay at Green Kiwi Backpackers.

Note: all thoughts on this review are my own, my accommodation is not sponsored unless otherwise stated. The location was by far one of the best things about this hostel. It was a five-minute walk from Bugis MRT, on the same street as the Sultan’s Mosque. Round the corner, there were a number of great bars and restaurants and a shopping mall within walking distance. And yet it was still very quiet, the perfect balance in my opinion. Room Size: The room was a comfortable size, not big but also not cramped. My only issue was that there wasn’t an easy place to store your backpack so it ended up on the floor in the walkway which made things feel smaller than it actually was.

Comfort: Pretty comfortable. There was zircon running the whole time which meant that it was always nice and comfortable for sleeping. The beds were sturdy and the mattress comfortable.

Cleanliness: The linen was clean… however one quick look under the bed showed about a centimetre of dust.  Add this with the air conditioning and you have a recipe for hay fever. If you are a hay fever suffer don’t forget your hay fever tablets.

Noise: All of the guests were generally pretty respectful. The walls were thin, but the general hum of the air conditioning gave off enough white noise that it was easy to ignore other people. It’s not a party hostel, more of a sit back – have a beer, listen to music and then fall asleep hostel. Chill. The only noise that may cause you trouble sleeping is the early call to prayer from the Mosque three doors up – however, I found that I could sleep through even that after a full day walking throughout Singapore!

Security: Not the best, but also not the worst. There are lockers downstairs, however, they are quite small so it’s just for your valuables. There were a number of doorways and people coming and going so anyone could have slipped up to the dorm rooms. In saying that – Singapore is pretty safe as it has very harsh punishments for crime… so I was never worried.

Size/amount: There were only four bathrooms (as far as I could tell… there may have been more in other areas of the hostel that I didn’t find) but I never had to queue for the toilet so that wasn’t a problem. Each bathroom was a toilet/shower combo which meant that the floors were always wet – but people were pretty good about putting the lid of the toilet down so the toilet seats were never wet. Quite spacious but would have preferred more hooks/shelves to put clothes/toiletries on while showering.

Water pressure/temperature: The downstairs bathrooms – were amazing for pressure and temperature! One of the best showers I have had in years… upstairs was weak on the pressure. Equipment: My biggest problem with this kitchen was the complete lack of cutlery and glasses! I had to ask the front desk for forks as there were NONE in the kitchen. Which was ridiculous. It’s clear that over the years, backpackers have stolen them as there were plenty of shelves labelled “cutlery” – which makes me very sad. Don’t steal the cutlery people! The knives were ridiculously blunt as well and could use a sharpen to save people for hurting themselves. But there were pots, pans and strainers aplenty so that was good. As well as a giant stainless steel workspace.

Size: The kitchen seemed big, however because of the giant stainless steel bench in the middle you couldn’t get past anyone who was working in there. It was great for little old me when I was in there on my own cooking up a Stir-Fry but have anyone else in there and it would be like a night club at 2 am!

It was spotless… which isn’t hard to keep clean with stainless steel, which is great.

Every staff member I spoke to was polite and helpful. However, none of them went that extra mile to make you feel super welcome. I have always thought that the difference between a good hostel and a great hostel is the staff. The staff here were good… not great. Internet: free throughout the whole hostel with different networks for upstairs and downstairs so that you always had the fastest network. Great.

Tour Desk: One of my favourite features of the hostel was the “things to do wall” which had ideas of things to do around Singapore and WHY you should do them. We didn’t book anything through the hostel as everything that was listed up on the wall seemed to be “do it yourself”style – which suited me fine!

Breakfast: Amazing! One of the best breakfasts I have had at a hostel in a while. It was simple but efficient and delicious. Toast with a variety of spreads all neatly laid out (presentation was definitely a key selling point for me) and different fruits as well as a coffee or tea. Simple and Delicious!

Extras: There was a great outdoor chilling space, and the front desk sold beer and cider. Which meant that after a hard day sightseeing you could sit back and relax with a cold beer and watch the world go by out the front. A great space for meeting your fellow travellers. Green Kiwi is a friendly and easy hostel to stay in, its definitely a no-fuss, no dramas kind of place. Which I really liked. The relaxed atmosphere helped me chill out and just enjoy being in Singapore. I do think the whole place needs good dust and the air conditioning units probably need a clean too. So overall, I thought it was a good hostel… but not great. I would recommend it if you aren’t someone who suffers from hayfever. 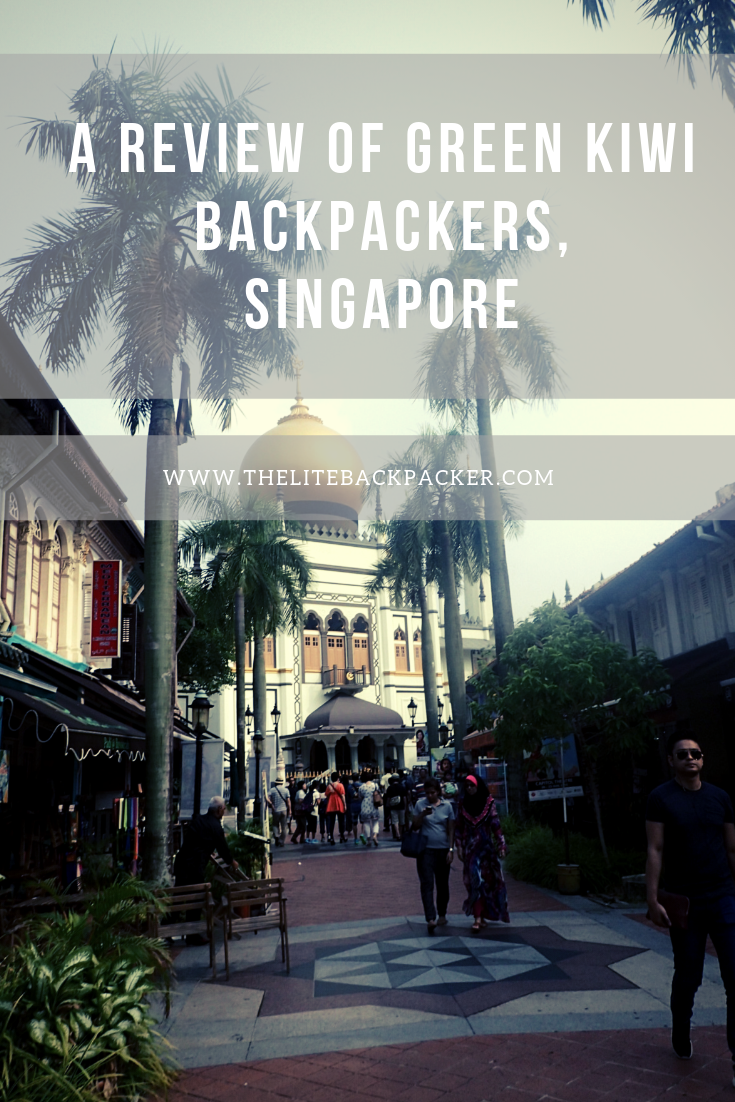