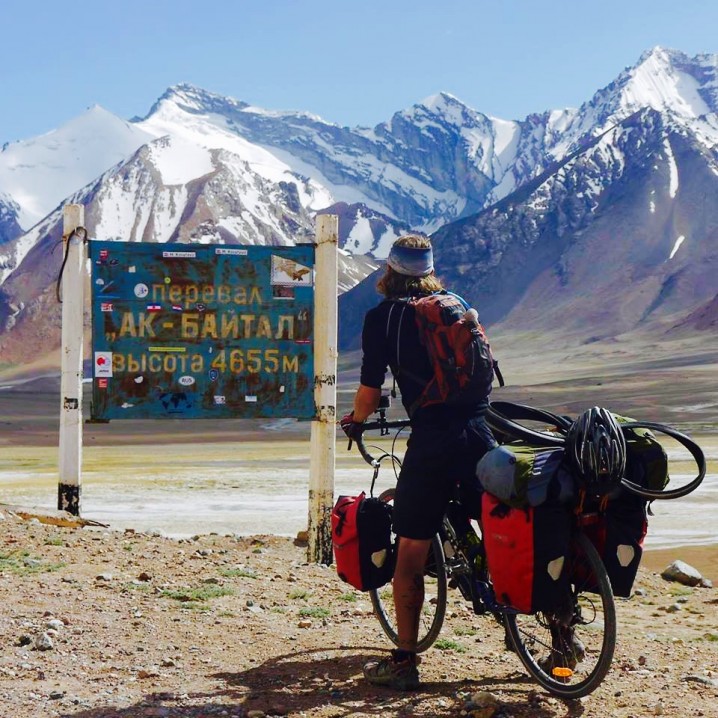 Nick is a man on a mission. A mission to help girls get to school all over the world.

How is he doing this? Well by cycling from China to England of course… OF COURSE! Oh in a dress… did I mention the dress? Along the way, he is gathering donations, and if the price is right you can dare him to do something ridiculous… in a dress – like jump in a freezing cold lake, or eat a camels testicle… IN A DRESS!

To find out more about One Girl and about why Nick is doing what he is doing – CLICK HERE!

I am in awe of someone who can be so focused in the face of blistering deserts, snow-capped mountain peaks and never-ending stretches of highway. I can’t help but think – wow, what an amazing way to see the world!

Here is my quick chat via email with the intrepid cycler as he traverses the “Stan’s” – before long he will be crossing into Europe for more adventures!

Where are you right now?

Dushanbe, Tajikistan! I just finished the awesome and challenging ‘Pamir highway’ and the majestic Wakhan Valley.

Tell us about what you are doing?

A few years back I had an idea to cross Asia on a bike. I got this idea while on another bike trip, that time across Europe. The Europe trip was about to end and I was loving the road but was looking for a bit more of a challenge. At first, I was thinking of just doing China a country so vast with endless potential, but after having a look at central Asia I was hooked on the idea of crossing the whole continent.

So far the road has been tough, taking me from the Mongolian Steppe and the Gobi to the Altai mountains in China/Kazakhstan, the many changing environments of Kyrgyzstan and into the wild and wonderful Pamir mountains here in Tajikistan. My next move is into the deserts of Uzbekistan, yet another challenge on this amazingly diverse continent So clearly you love cycling, has this always been a passion of yours?

When I was a kid I had a bike and I took it out quite a bit. I was never a ‘bike nut’ so to speak but I loved to explore the surrounding suburbs of my area. It wasn’t until years later, in my twenties, that I really embraced the bike as a mode of transportation and started using one for my daily commute. It was from here that I got the bug and started to ride pretty much everywhere. The bike I was on, an old hand me down steel-framed tank of a bike, aptly named ‘The Intimidator’, and even though it handled like a shopping trolley it was great fun!

At what point did you think, “I love to travel AND I love cycling – maybe I will combine the two”?

I was actually living in London at the time working in the Inner West of the city and working in a pub (stereotype much?). One night I was sitting with some friends and got an invitation to one of their 50th birthday parties in Wales. The location was on the far west tip of Wales and I jokingly said I would ride to it. In the end, my boss told me that I would never make it, so being a stubborn Aussie I took up the challenge and even threw in a fund-raising military-run along the way. I arrived at the party the day before the big event and once the whole thing was said and done took off in the direction of Scotland. A few weeks later I called my boss from Edinburgh and told him I was never coming back.

Have you done many cycle travel trips?

I have done quite a few small trips and a couple of long-term trips too. The largest so far was a trip from Santander (Spain) to Podgorica (Montenegro) that took me through nine countries in Europe, a distance of around 4,500kms and took a little under three months. Apart from that, I have done a lot of the UK from South England to Northern Scotland in a collection of small and medium-sized outings ranging from days to weeks on the road. Also, a couple of trips around Australia including a failed trip from Sydney to Melbourne when my entire back wheel deconstructed in the middle of a 145km abandoned back road. How do you plot your route? Based on places you want to see or flattest way?

Most of my route planning revolves around word of mouth from people coming the other way. But before I get on the road I just really pick a direction and head for the mountains. Flat areas are nice for a day or two but they tend to be quite monotonous in terms of scenery, the mountains, on the other hand, hold a plethora of diversity and in turn make up much more interesting itineraries.

What’s the number one advantage of using a bike as your mode of travel transport?

The ability to take your time. You really need to travel by bike at least once in your life to experience what I mean by this. In a car, you get much more comfort and if that car is a 4×4 you can go pretty much anywhere, something that we cyclists cannot do, but you also miss all the little things. When you are on a bike you smell the storm coming on the wind, you feel each breeze on your face and the water between your toes when you do river crossings. You get invited by the locals for tea, lunch, a place to sleep in pretty much every country that you visit and when you want you can just pull up on the side of the road, set up camp and watch the world go by.

Locals understand that when you are on a bike you are looking to find more in their country. People have been on the road for as long as time itself, the invention of the car and plane have taken away the companionship that vagabonds and nomads have relied on for centuries. By being on a bike people see that mentality shine from inside you and immediately they want to show you hospitality. This, of course, doesn’t always work in cities but with the invention of websites like www.warmshowers.com (Couchsurfing for cyclists), you can still find this in the hustle and bustle of big city life. Cycling isn’t just a great way to get around, it’s a mentality. Are there any unique travel experiences that you have had that came about because you were biking it?

Every day on this trip I have experienced something amazing due to being on a bike. In Mongolia I was trapped in the middle of a massive sand dune maze, pushing my bike through km’s of deep sand whilst trying desperately hard to conserve what little water I had left. After finding a Ger (traditional Mongolian nomad house) I thought I would be saved, but to my dismay, they had only a small amount of water left and could only spare a litre. After another hour of pushing I saw a man on the horizon come into view, he was on horseback but as he came closer I saw that he wasn’t alone. After the two men arrived I noticed that one man was on a horse and the other on a Chinese made motorbike, a kinda old world meets a new situation. On exchanging hellos they noticed that I didn’t have water, so without blinking the motorbike rider signalled me to get on, and we took off into the desert. After about 10 mins of riding, we came across a large well that had no marker or anything to reveal its location. I filled up my bottles, got back on the bike and we made it back to my bike and the horseman. After many thanks, I tried to pay the two men but they refused, only to turn their respective mounts around and to head off into the distance with a small wave of their hands. What is your favourite dinner after a day of cycling?

Anything that I don’t have to cook myself that doesn’t involve a watery soup! One issue with homestays is that food portions can be a little small and not aimed at the carb hungry cyclist. It’s an amazing experience in the homestays and I don’t want to sound ungrateful but when you have been on the bike for ten hours, have climbed over 1.5 vertical km’s whilst dragging 60kgs of bike and equipment your body is screaming for sustenance. Quite often I have declined stays in locals houses simply due to the fact that I am too hungry and exhausted

Do you have to cook a lot of your own food, if so what is your chef’s speciality?

I cook most nights in my tent, thankfully I have a nice little vestibule and a good small stove so even when it’s raining outside I can prepare a meal with little to no rain delay. The turn to dish is typically some salami, tomatoes, onions and peppers mixed in with pasta. It’s not going to win any awards but it sure does the trick. Oh, and if you can follow that with a hot chocolate then you are winning!

Where is your next stop?

Samarkand, Uzbekistan. So it’s a long hot road ahead!

If you want to get involved and help Nick help girls go to school check out One Girl. Its great cause!