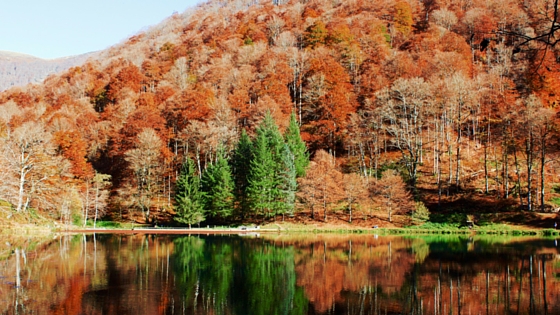 I recently spent a little over a week relaxing in a small town in the South of France, it was glorious! The food was fresh and tasty, the people friendly and very French and the scenery was like a picturesque 1950s Hollywood movie set. We stayed in the gatehouse of a stunning château right at the base of the Pyrenees. Surrounded by mountains, forest and quaint hamlets we spent our days walking and picnicking and our evenings drinking wine and eating delicious home-cooked food. I loved it.

However, when I tell people about this amazing week they often may a remark about the cost and how that’s not really in a  backpackers budget. Well, my friends, this is where you are very badly mistaken. Like with all travel trips – if you do a little research and are willing to make a few sacrifices then everything can be done in a backpackers budget. A great example is Lauren from the Never Ending Footsteps recently found a way to travel through the Maldives on a backpackers budget – showing that even one of the most luxurious places on earth can be accessible to the budget traveller. Now to start with Europe isn’t the cheapest place to backpack – most travel bloggers and experts agree that you are looking at a budget of 70-100 Euros a day on average across Western Europe. Of course, there are always places that are a little cheaper… just like there are places that will blow out your budget.

So, how do you spend a week relaxing in the South of France on a Budget?

Research the time of year: There are peak seasons for most locations, though some places never have an off-season. It’s important to spend some time working out when and why there are peak seasons and how that can fit into your travel plans. For the South of France, peak times are the height of summer when lots of people come to go hiking, relax in the countryside or have a base for the Mediterranean. In the winter it’s all about skiing and snow sports – châteaux’s and lodges are a great place to base yourself for a weekend hurling down a snow-capped Pyrenees. Therefore, look at seasons like Autumn and Spring. I was there in late Autumn and was blown away by the dazzling colour display of the leaves changing colour. During the day it was sunny and quite mild – great for hiking up in the mountains, at night it was cool and crisp – great for a wood fire and a stew.

Take some friends: Accommodation, transport and food are all cheaper when divided by 2 or 4. So call up your friends and propose a quick week escape full of cheese and wine… who could say no?! For the sake of this exercise, let’s imagine you did manage to convince 4 friends to come with you… Flights: As we all know flights around Europe are cheap… though not always easy, as anyone who has flown with Ryan Air can attest. Fly into one of the big cities in the South of France and then catch a train or hire a car from there – its cheaper and less hassle. We flew into Toulouse which was straight forward and caused very little fuss. Watch for deals, set up an alert with Skyscanner and get a great flight from pretty much anywhere in Europe. Now, many of you aren’t travelling from somewhere in Europe and so flights are a lot more expensive – however, if you are looking at having a small holiday and want to do something relaxing and don’t feel like sitting on a tropical beach in Asia then this is a good alternative… and just as cheap.

TRAVEL TIP: You can’t get a pre-paid SIM card easily in France, so either convert back to using old-fashioned paper maps or switch on your global roaming. Transport: As we were staying out in a small hamlet we realised we would need a car to get around and explore. We managed to get a small compact car for 83 Euros for the week. Granted it didn’t have much power and was quite small but as we were driving up and down little country roads that ended up suiting us fine. If we had been doing some serious highway driving I may have considered a car with a bigger engine. Between 4 people that’s 21 euros each for the week or 3 Euro’s a day… not bad at all! Filling up the car depends on how much you drive it and on the size of the engine – but budget another 80 Euros to be on the safe side (you probably won’t need that much if you have a small engine and don’t drive massive distances, but I always over budget rather than under). Divided by 4 that’s 20 Euros each for the week.

Accommodation: Airbnb has some great deals, seriously SOME GREAT DEALS, spend some time doing your research though. Always pick a place with good reviews and check the location thoroughly. We stayed in a great place in a tiny hamlet called Pouech, close to the larger town of St Girons. It was 53 Euros a night total, and could comfortably sleep 4 adults, that’s 13 Euros a night each! It had a wood fire that our host kept stocked, a huge useable kitchen and a washing machine and dryer – what more could you want!? Airbnb accommodation in the hamlet of Pouech

Eating in: This is the cheapest way to eat pretty much anywhere and when you are in a location like the South of France there is a plethora of fresh food to be bought for cheap. Head to the local baker for some fresh fluffy bread(though get their early as in small towns most of the good bread is sold out by mid-morning) or the butcher to get cuts of meat that are local to the region and fresh, finally, go to the local grocer and buy the vegetables that come from the farms around you and are in season – so much more flavour and colour when you know where it comes from. But my favourite place to buy food from is the markets, their produce is fresh and you can’t help but want to create amazing recipes like this French Provincial Vegetable and Mussels Recipe. Most country towns have a market day, just ask a local when it is then turn up there with empty baskets – it’s the cheapest and best way to stock up for a week of cooking in your little cottage. Approx 5 Euros a day per person if you eat in.

Eating out: If you want to go out for a meal go out for lunch. There are so many restaurants and cafe’s that offer great lunch menu specials, such as a three-course meal paired with wine for 14 Euros. It is generally a set menu so hunt for a place that is serving something you want to eat – but I guarantee that the food will be fresh, made with love and value for money. Oh, and you will probably be eating with all the locals as in the South of France they all go out for a nice big lunch as well!

Things to do: When you are staying in the country there are always outdoor activities that you can do for either cheap or free. Go hiking into the mountains, have a picnic on the side of a lake, hire a bike and pretend that you are competing in the Tour De France or just stroll from hamlet to hamlet stopping off at Fromage stalls along the way. For a slight cost, there are plenty of activities in the area as well – from historical castles and walled towns to adventure parks and archaeological digs. The best part is that because you are away from the big cities and big tourist attractions the cost of these activities isn’t what you pay in Paris. Most range from between 5-15 Euros depending on the activity.

Looking at the overall picture of costs

Looking at the above table you can see that even if you were to go and stay in the South of France on your own for a week you could do it under the expected “backpackers” daily budget of 70-100 Euros a day. If you went with one other person the costs become a lot more reasonable – and if you have 3 friends to go with you… well then it’s super cheap.

I based the above on eating out only 3 times in the week and doing 3 paid activities – so take this into consideration when creating your own budget. If you are likely to eat out more than that and eat out for dinner as opposed to lunch – then look at upping those costs significantly.

Also, this doesn’t take into account the little extras like wine and shopping – you know how much you are likely to spend on those items so add those into your budget. Wine is a lot cheaper in the South of France though… so it shouldn’t blow out your budget too much if you are sharing a bottle or two between friends over dinner.

What are you waiting for?

Seriously… stop reading this blog… go and spend some time relaxing in the South of France on a budget.