Looking for a challenging walk that is jam-packed full of nature, wildlife, wild swimming and you don’t have to leave Sydney for? I was, I was searching for a walk that would give me a taste of adventure and the outdoors without me having to drive out of Sydney to a national park for an hour or so. Middle Harbour has a large amount of bushland around it and some spectacular waterways, making it the perfect place for just such a bushwalk. I have now done a few walks in the area and the Middle Harbour Creek Loop is by far my favourite. After completing the hike in the winter months and seeing the beautiful swimming spots, I added wild swimming to my NSW Travel Challenge. I was determined to come back in the summer for a splash around. Let me tell you… it did not disappoint. About the Middle Harbour Creek Loop

I have completed the walk in both directions, and I prefer to do the south bank first in the summer months. This is because it’s the harder part of the walk, with more climbing and the track disappears in a couple of places. By the time you get around to the north bank (which has all of the stunning wild swimming spots), you are more than ready for a dip. If I was doing it in winter and swimming was off the cards I might do it the other way, that way I have all of the beautiful spots up first while I am fresh and energized to absorb them.

The south bank of the river climbs slowly up onto the ridge to give you stunning views of the river system and the bush around. At one point the track becomes quite faint, this is because of the dead trees after the bush fires. If you keep following the river though, you will eventually find the path again. I only lost it for about ten minutes and did not feel concerned at all. The north bank has numerous creek crossings, each one more beautiful than the next. What’s more, there are several little beaches or rocks where you can envision setting up for a picnic and a little bit of wild swimming. The north bank is a lot more flat and stays predominantly next to the river for the most part. What you might see on the Middle Harbour Creek Loop

While doing this walk, I have seen lots of amazing things. Including an echidna, a couple of Goannas, loads of water dragons, butterflies, and cicadas. The echidna was by far my favourite. He was just shuffling along the path until he found a piece of wood that was clearly full of termites, which he then started drinking up. Echidna’s are almost completely blind in the day so I don’t think he saw me… he would have heard me though, and clearly didn’t care. I did not touch him or get too close but spent some time watching him instead. Did you know that echidnas are one of only two creatures that are classed as a monotreme?

A lot of people are scared of goannas due to their size. Don’t get me wrong, I am definitely not going to hug one anytime soon, but they aren’t scary. Usually, they will hear (or feel from the vibrations) you coming a mile away and start to scamper up a tree or get out of your way. I think they are quite proud creatures as they move in a slow dignified way, almost as a challenge. Give them enough space and they will soon clear off your path. That being said, if I was camping near a spot with goannas I would make sure my food is packed away securely as they are scavengers by nature.

You will be much more likely to see a bunch of lizard tails disappearing around rocks than you are snakes. I am not saying that there aren’t any snakes… as there probably are, it’s just that most snakes have more sense than to bask in the sun on a path frequented by humans. So don’t be nervous about those little tails disappearing. There are loads of spots where you can stop for a wild swim to refresh yourself. I personally like the section under the pipe where the fork of the river. The deeper water of the river closer to the park and the bridge is green, this is because it is mixing with saltwater from the harbour. Most Sydney Siders will advise you not to swim in this water as the murky water makes it a prime breeding ground for bull sharks and jellyfish. However, further upstream where the water becomes fresher and clear it is ideal for a swim. There are a couple of paths down from the neighbouring suburbs which makes a few of these spots quite popular on a super-hot day. But unless you are there in the peak summer period (like I was) you are very unlikely to run into anyone, and so have a spot all to yourself. As the river later forms part of Middle Harbour it can also be tidal, at low tide there will be a lot less water to swim in, but it is still glorious.

Always be safe and careful when swimming alone in the bush. 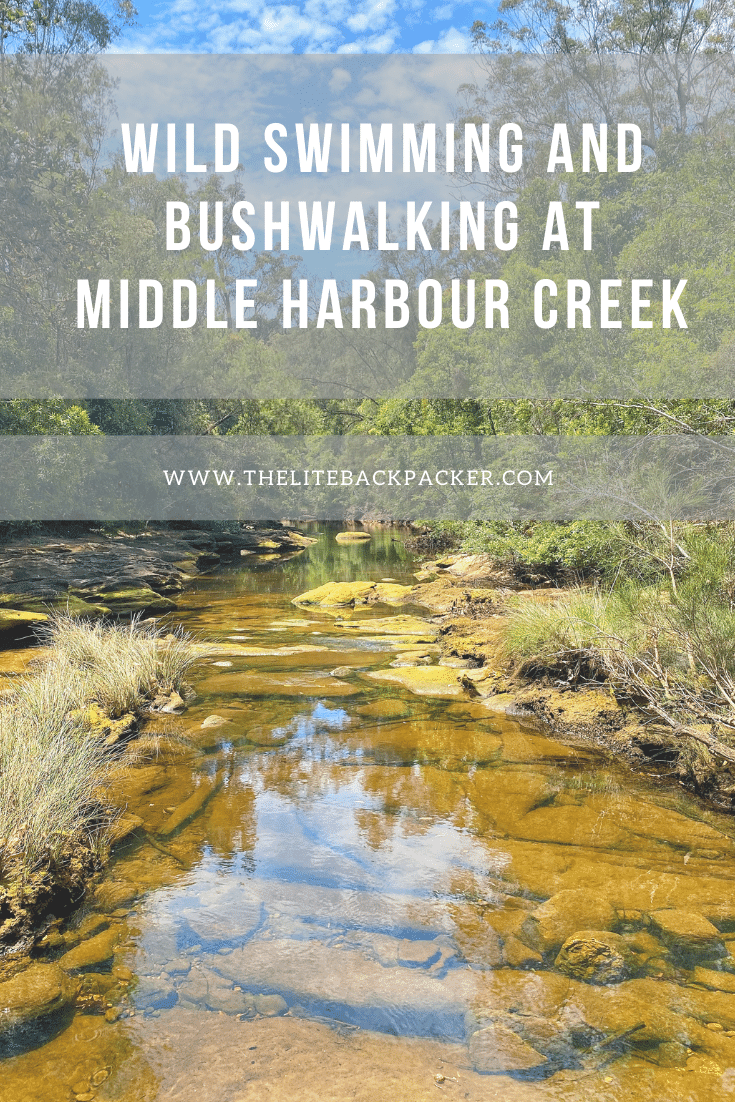