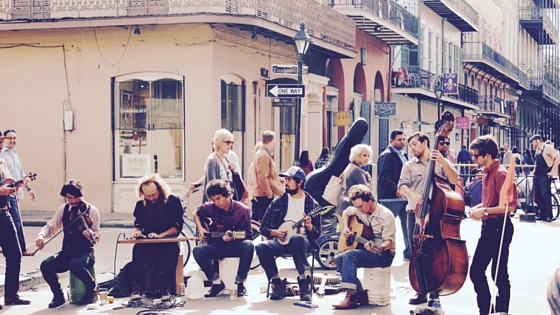 I have always been fascinated with New Orleans, it has always seemed like a bright and vibrant place full of personality and adventure. What’s more it has an amazing food scene that I just wanted to be a part of – so naturally I signed up for a New Orleans Cooking Class.

I went with the New Orleans School of Cooking as I found a great deal for them on Viator. From what I have heard all of the chefs who run the New Orleans School of Cooking Daily Demonstration Classes are pretty good. Personally I would recommend Toya Boudy to everyone, she was fun, informative and had so much energy that despite gorging and drinking delicious beer all afternoon I left the room energised and ready to cook up a storm.  New Orleans food is amazing and like nothing I have ever had before. The Delicious Food at New Orleans School of Cooking

Gumbo: Was the perfect introductory dish to New Orleans’s style cooking. It was through this dish that the amazing chef Toya showed me how to make a roux (not as hard as it sounds… though not as easy as I would like) and I finally discovered what the “Holy Trinity” means (three different types of vegetables, usually: capsicum, celery and onions)!  For this dish Toya used some great local ingredients including crawfish and a local sausage that was similar to a chorizo and served the whole thing over rice.

Jambalaya: Using the same principle of the Gumbo, jambalaya also has a base of a Holy Trinity of Vegetables but no thickener or roux. It also has different spices and due to the lack of thickener it was a different texture from the Gumbo. I preferred the Jambalaya as when it was served over rice it was completely different to anything I had tried before. Gumbo reminded me a little of paella from Spain.

Pralines: I had never had a praline before and I was completely blown away by the flavour, but also the texture. I expected it to be hard and chewy like toffee but they were soft and crumbly like…. Well not like any other sweets. There are so many great things about pralines and so many bad things. They are a sweet Moorish and amazing desert… but that is also the problem. There is so much sugar in them and they are so delicious it would be hard not to sit on the couch and gorge on a whole batch in one sitting. I am determined to make these myself though and give them to all of my friends for Christmas… Why do a New Orleans Cooking Class?

New Orleans is a city famous for its music, cocktails and food. It is like nothing I have had anywhere else in the world so far. The flavours were complex and warming. The colours and texture of each dish was a great representation of the city that has made this style of food so popular. However, the main reason you should head to this New Orleans cooking class is to discover just how easy it is to make all of these delicious meals at home… something I never thought would be possible. Being able to taste each dish after watching how it was made really demonstrated how easy it is if you take your time and have great ingredients. I think I will have to do a few practice batches before I am a proficient Jambalaya maker, but I am up for the challenge.

Pro’s: The chef Toya Boudy (she also has her own YouTube channel) was what made my experience so much fun. She was energetic, funny and full of great tips on how you could make this easily at home. Along the way she also told us some great stories about growing up in New Orleans and its history. As I didn’t know much beyond the Lonely Planet’s blurb before I got there, this made the class one of my highlights. They also serve you different types of drinks and a locally brewed beer… which went really well with the dishes.

Con’s: A lot of the ingredients used during the class were an upsell for the schools shop, which won’t translate easy to my home town in Sydney, Australia. I will need to do some interneting and create my own spices and hot sauces when I create this at home. Also this was only a demonstration class, the hands on class was too far out of my backpackers budget. That happens sometimes. Which does suck but at least they offered the demonstration version as well so that I still got to learn a little.

Every traveller has their must do thing; some like beer and clubs, others go sky diving or bungee jumping, and some buy amazing souvenirs. My must do item which I splurge on – is cooking classes! NOTE: This post is not sponsored, all my own thoughts.