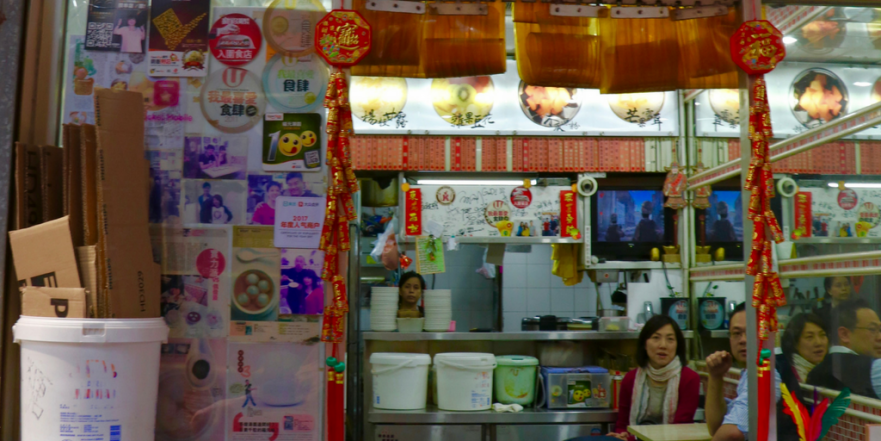 I love sampling new food when I travel, and what better way to experience a new city than doing a walking food tour. A city like Hong Kong has so many different cuisines to sample that unless you know where to go, you will miss something.

Normally when I travel I like to book in a cooking class, and last time I was in Hong Kong I did one with Home’s Cooking Class. (a fantastic day and worth every penny). However, on this trip, I decided to do something a little different. I wanted to get to know Hong Kong’s famous street food side. There are several Hong Kong island food tours that you can do, in fact, I was a little overwhelmed by the number of choices. I chose Eating Adventures Hong Kong Island Food Tour based on location, the great reviews and the price – the perfect trifactor. I met my guide, Yen, and the other tour participants at North Point MTR station. It was a small group which was great as it meant that we could easily hear Yen and ask her questions. I would never have thought to visit the North Point district if it hadn’t been a part of the tour, and I am so glad that I got to see it as it was vibrant and full of energy.

All the places we visited on the tour were a short walk from one another, so although we were moving around a lot (which was great for the digestion) we didn’t go that far. What it demonstrated to me, was how many food places there are in such a small vicinity and the fact that Hong Kong can sustain such an industry. Yen gave us several stats about the number of restaurants per person in Hong Kong… but I have no memory for numbers so sadly I can’t repeat them – you should go on the tour and find out.

Most of the places we visited on the tour had been recognised by the Michelin guide, though still very affordable on a backpackers budget. Our guide told us that this had all happened recently and that she was sad about it, now they would get popular and she would have to wait in line for her favourite places.

Between each tasting stop, our guide would wind our route through the streets, explaining the different things that we would see on the way. We passed through markets, herbal remedy stalls, effigy burning stands and many other things that were foreign to me. For that alone, I would have found the tour worth it… the food, however, made it exceptional! What I Ate on the Hong Kong Island Food Tour

These are apparently a local snack and judging by the line, they are popular. Our guide explained that the best egg waffles are hard and crunchy on the outside and fluffy on the inside. To do this there are several techniques that the seller employs to get them perfect. From using a cooling fan to adding ventilation holes to the bag they are served in. For such a small and simple snack – getting it right is very important.

The shop that we got these from was also a vegetarian dumpling store. Yen explained that the naming conventions for their vegetarian food can be very confusing as they don’t remove the “meat word”. Vegetarian pork dumplings, not vegetarian dumplings. I can imagine it would be hard to know what to order if you were a vegetarian. In relation to the sticky rice balls, they had a type of sugar “thing” in the middle. The flavour was good, but I personally wasn’t a fan of the texture… just a personal preference as others in my group loved them.

This was my favourite tasting on the tour. The goose is a famous cuisine in Hong Kong and you can get it pretty much anywhere, but there are levels of amazing. This place topped the charts in my opinion… and the Michelin guides opinion as well. The goose is served with a broth to help wash everything down and on top of rice. I devoured my portion and was sad when no one else left anything on their plates for me to pick at.

A little hole in the wall that served some of the best dumplings I have ever had. Our guide bought two different types of dumpling for us to try. I am not normally the biggest fan of pork, but these were absolutely scrumptious. And standing out on the street with the locals who were also shovelling dumplings into their mouth as fast as possible made it even more fun.

Our next stop was more of a Yum Cha style of dumpling establishment. We sat at a table while our guide ordered a variety of different dumplings. By this point, I was pretty full… so I didn’t eat as much as I wanted. What I did eat was amazing. The ratio between casing and filling was perfect. The fillings were dynamic and different to anything I had tried before.

These were little dumpling balls that were filled with either cashew nuts or sesame sugar paste while floating in a ginger syrup. So tasty and a great palate cleanser after all the dumplings! Why you should do a Hong Kong Island Food Tour

The food, obviously! I was exposed to different items on the menu than what I would normally order, and as such expanded my repertoire of favourite foods – Lo Soi Goose, is now a must for me every time I go back. However, I think the most valuable part of this Hong Kong Island Food Tour was the information, history and insights that we got from our guide. It was a small snapshot into a different culture through the medium of food.