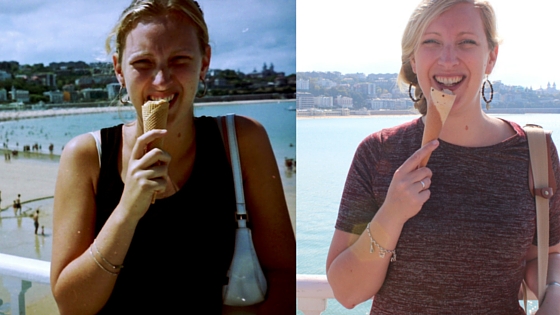 10 years ago, I embarked on adventure of a life time. I bought my first backpack and a plane ticket then headed off to Europe. I was scared and nervous and a little apprehensive, it was all completely new to me. I wanted to see as much as possible and have every experience that an 18-year-old thinks is important.

10 years later, I have embarked on another adventure of a life time. I packed up my old backpack, bought a plane ticket and headed to Europe. This time I wasn’t scared or nervous but eager and excited. I wanted to get to know places better, travel slowly and bask in it all.

Oh how I things have changed… and yet… somethings haven’t.

When I was 18 my knowledge of Europe came from my parents, movies and guide books, which I read in droves. I felt completely overwhelmed and scared about how to get around and how to see all of the things I wanted to. I knew that I didn’t want to do a contiki tour as I had romantic ideas about disappearing off the beaten track. However, my old friend Lauren from The Healthy Gourmande, gave me a Busabout brochure. Busabout was a great alternative, it had the security of a tour but with loads of flexibility. Best of all – my transport was sorted. As an 18-year-old, it was definitely the best solution and an experience that gave me confidence for all of my travel adventures to follow.

On this last trip… I definitely made it up as I went along. I had a rough idea of the things I wanted to do and some of the places I wanted to see… But ended up booking everything last-minute depending on weather, friends or change of whims. I had the confidence to be creative on the road and not worry too much about getting to train stations.

Which brings me to The Internet…

Smart phones did not exist when I travelled as an 18-year-old. Which meant that I had to use the computers in hostels which were often full of bugs and incredibly slow. Not to mention cost a fortune. This made booking things on the fly very hard. It was often easier to organise tours directly with travel agencies. Now I carry my smart phone with me and refuse to stay at places that don’t offer free WiFi. I can book my hostel while I sit waiting for a flight. The days of paying 5 Euros for 15 minutes are long gone. Outside the Colosseum… or inside!

On my first trip, I would use precious internet time once a week to write an email home to my parents. I did have a phone, whose fees were astronomical so I didn’t use except for in emergencies. My mother loves to tell the stories of some of the text she received in the middle of the night when I perceived myself in an “emergency”.  There was no Facebook and I didn’t like Myspace so there were no status updates to worry about. I would spend hours searching for the perfect post card for friends, then longer writing them… and then there was the almost impossible task of finding a place that sold stamps. Now I use the Australia Post app to upload my photos to a post card that they print and send for me, takes 5 minutes and is a lot cheaper.

Packing then and packing now

I still have the same backpack that I used on that first trip… and it is still way too big. I always take too much with me and then spend my trip leaving a trail of clothes and toiletries behind me, my own personal bread trail home. The essentials are still the same though. Quick dry towel, Swiss army knife and zip lock bags. But there are no heels and my makeup bag is a lot smaller…

When I was 18 a bed was a bed, all I wanted was a place to sleep for a few hours after leaving the bar and before sight-seeing the next day. Often, I would sleep in my clothes as I couldn’t unpack my PJs in the dark. Now, when I pick a hostel I look for ones that are a little away from the party area – I want a good nights sleep. I also look at other options. If I am with a group of people I am definitely checking out AirBnB – a site that is clearly changing the tourism industry. AirBnB gives me the opportunity to stay in local locations, get great local advice on places to eat and things to do as well as giving me and my friends a clean (generally) space of our own. Actually can’t say enough good things about my experiences with AirBnB in Europe.

The lure of happy hours and cheap drinks would suck me in nearly every night as an 18yr old. Then once the happy hour was over we would gleefully purchase the tasty wine and beer at full price. If we were very cheap we would buy the super market wine and drink in our hostel room or common room… yet inevitably someone would suggest going out and we would be back on the town in the over priced bars. Now at 28 a good glass of wine is worth a bit more moolah and wanting a clear head for the following day is what keeps me at 2 or 3. Wine now accompanies food as an enhancement and not the other way round. Chilling out in Tapas bars and making friends is preferable to dancing until the early hours of the morning in a smoke-filled club. Also, I have learned what a great pleasure it is to eat out alone when you are travelling (or when at home for that matter) I had to see the Colosseum at 18 but when I found out how much it cost I contented myself with walking around the outside – I had seen it right? Now at 28 and having read a lot more about Roman history I wanted to go in and see it in detail, stand in the epic amphitheater and marvel at the ancient architecture that has survived 2000 years. It was worth it. My taste for museums is more refined now and I hunger to see more of them. I choose which ones interest me as opposed to going to every “must see” location and being bored out of my brain. I now know what my interests are and don’t waste time and energy on things that won’t hold my attention… I would rather eat pizza instead.

I no longer have the metabolism of an 18-year-old and so surviving off pizza, lasagna, baguette’s and 2 minute noodles is no longer an option. Plus, I seem to have developed taste buds in the last ten years so want to enjoy my food – and where better than Europe to get delicious amazing food. Sometimes it costs a little more, but it is always worth it. When I was 18, markets intimidated me, I didn’t know what anything was. I hadn’t really lived out of home yet so I wasn’t sure what I would need to cook something edible without the help of Mum’s pantry. Now I love markets, they are my favourite place to go. I love the culture, the sounds, the smells… and of course the food. But, it was that fear of markets, eating pizza and the weight that I put on that inspired me to create this blog. There is after all an easy and cheap way to cook when you travel, hopefully future 18-year-old travelers can read this and head to a market instead of the 7Eleven.

So is travelling as a 28yr old more expensive than when I was 18… willing to live off pizza and sleep in flea-bitten beds?

No. I actually have spent the same amount of money in the same amount of time. And, I have done a lot of activities that were a little bit more expensive than on the regular backpacker trail. The only way I can explain this is that by creating my own itinerary and not using a tour I saved a lot of money. Of course, I also didn’t spend a ludicrous amount on going out or souvenirs that I know I won’t use. Somehow it has evened out. Two very different trips – same cost

It took me a while to write this post… it started out fine, with lots of ideas and tapping away at my key board. Then I was distracted for a couple of days by sight-seeing and catching up with old friends. When I sat back down to write it again Paris was in turmoil… some how it didn’t feel right to continue.

Ten years ago when I arrived in London it was 4 weeks after the London bombings. There was a new danger in the world, London had just become comfortable that their peace with the IRA was holding and were beginning to relax their security… then the bombings. I remember riding on the tube and everyone staring at me and my giant backpack, trying to smile at people to reassure them that it was just smelly clothes on my back, and then feeling like a smile was inappropriate. The faces were full of fear and anger, and soon I was feeling nervous, I have never been so relieved to get off a train.

So what has changed… terrorist attacks are still happening.

Its our attitude that has changed. Maybe it’s through images and stories being shared through the internet or maybe its due to the number of displaced people’s the globe over spreading stories of horror. After this attack, my Facebook news feed was flooded with compassion for Parisians, but also for the hundreds of Syrian refugees who are running from the same terror, and those in other places that the news wasn’t covering as heavily. In many ways social media was plugging the hole that the news stations were missing, drawing people’s attention to all corners of the globe where the atrocity of innocents dying is occurring. It’s not perfect and the world has a long way to go, there are a lot of stories out there that should be shared. But it’s a start, the sentiment that I felt coming through was one of sadness, a calling of unity and a wish for peace. Compared to ten years ago when there was anger and resentment. Atrocities are still happening, but I like to think/hope that as a race we are dealing with them with compassion. Loving the picturesque streets of Paris – then and now!

Europe really hasn’t changed all that much, there may be more roads and the internet, but the basics are still the same. The Louvre still takes a few days to see even a portion, pizza is still the best in Italy, and Tapas with sangria is still a great night out in Spain. No, what has changed is me. When I went to Europe at 18 what I was really doing was discovering myself. Now at 28 I was just looking to discover Europe. And what an amazing place it is!