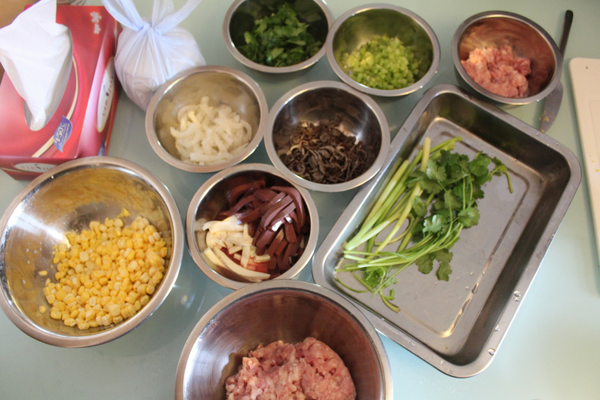 Home’s cooking class may have been one of the best classes I have ever done. It was authentic, welcoming, inclusive, interesting and most importantly – FUN! If you are heading to Hong Kong, I strongly suggest looking up Joyce and doing one of her cooking classes, you won’t be disappointed.

As those who follow my blog know, cooking classes are my thing, I love doing them. However, I had a very disappointing experience in Thailand, where I had the worst cooking class ever – it was with some trepidation that I signed up to do another one. The old “get back on the horse” saying was running through my mind, I wasn’t about to let one bad experience ruin an activity that had up until that date, taught me so much and given me so much joy. Thankfully, Joyce was an amazing host and everything she taught me blew my mind and taste buds away.

The charm of Home’s Cooking Class is that it is done in Joyce’s apartment. Anyone who knows anything about Hong Kong knows that apartments are very very very small and very expensive. Getting to see a locals home and the tricks she utilised to get the most of her small kitchen gave me a unique insight into what it is like to live in Hong Kong.

Joyce met us at the metro station so that she could take us through the local wet market. She purchased a number of items for our class while also showing us her particular favourites. It was a great opportunity to ask about some of the vegetables and meat that I had seen but had no idea what it was. I found certain parts of the wet market very confronting – a fish sliced open with its heart still beating was particularly hard for me. Also the cages of turtles that were full to the brim, still alive and looking up at me with large pleading eyes, I wanted to rescue them all. I did see one fish escape, this one hadn’t been sliced open but was just flopping about on a plate, it managed to flop off the plate and into a puddle. At first they tried to catch it, but once it made it to the puddle they stopped – it had been contaminated by the puddle water – it then flopped towards the drain and disappeared to freedom… I hope. I am not a vegetarian, but that tour almost changed that for me. What I Cooked at Home’s Cooking Class

On the website there is a list of recipes that they do on specific days of the week. However, we were able to chat and negotiate with Joyce ahead of time about what we would prefer to cook, which was great.

Although dumplings aren’t “traditional” Hong Konganese fare, being such a multicultural city they have definitely taken their Northern neighbours speciality and made it their own. So naturally we had to make our own. The fun part of this was learning how to roll the dumping, a skill that could easily be transferred to make tortellini. The filling was beautifully weighted, not too “porky” and not to “herby” – just right. We boiled most of the dumplings but our host Joyce did fry a couple up for us so that we could see the difference in flavour. I have always read about hot and sour soup, its constantly mentioned in movies and TV shows. However, I had no idea what went in it. It was probably good that I didn’t know what went into it before I did the class as I would totally have asked to change. I am so glad that I didn’t, and I am also glad that I was cooking with other people who were very open-minded where it comes to food. If you don’t know whats in it… I am not going to tell you as it is one of the most tasty things I have ever eaten, but I wouldn’t have eaten it if I had known what was in it, go out and try it, tell me what you think. Why you should do Home’s Cooking Class

There are so many amazing places to eat in Hong Kong, it is a very fluid city – like New York, London and Singapore – there are so many cultures immigrating, passing through, visiting that there is a delicious culinary scene. However, it can also be very expensive. I was a big fan of the BBQ duck and rice places but there are only so many times you can eat BBQ… maybe, I didn’t hit my threshold, but I am sure that other people might. Doing this cooking class was a great way for me to try different local food while also getting a very unique insight into the life of a local. As mentioned before, the class is set in Joyce’s home, and I loved everything about that. Meeting her at the metro, walking through the wet market, Joyce saying hi to all of the stall holders she knew, walking back to her apartment, then seeing all of the ingenious ways she works with a small space. A completely different experience to an Australian who is used to giant houses and large kitchens. The food was great, and I learnt a lot, but you should do this Home’s Cooking Class for the cultural immersion. Pro’s: Joyce! She was such a lovely person, full of information and ideas. I felt very comfortable in her home asking her a million and one questions about her life. It was completely fascinating. The other major pro was how hands on the class was. We literally did everything, there was no “here are some chopped vegetables that I prepared earlier”- we cleaned, chopped and cooked everything.

Con’s: I can’t really find any. I guess the only con would be if you are a group bigger than four it would be hard to do this class due to the space… but that was a pro for me, as it meant that there was only 3 people in my group and we all had an opportunity to try everything. So overall… no con’s.

NOTE: This post is not sponsored, all my own thoughts.