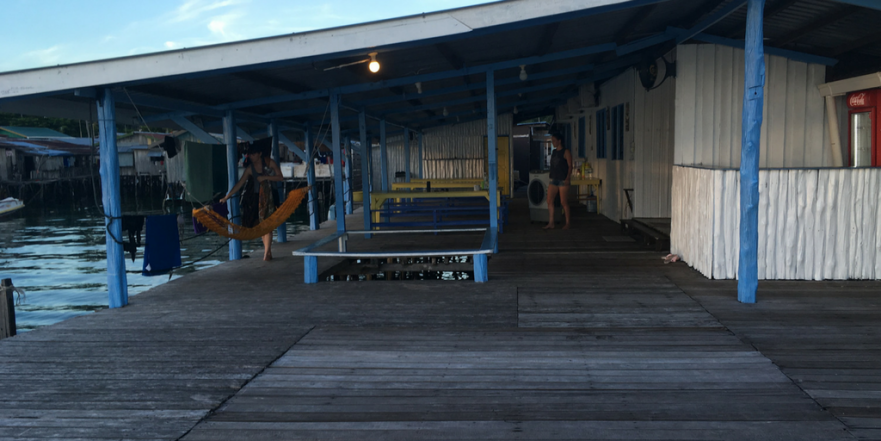 Booking into Star Mabul Lodge on the island of Mabul off the coast of Sabah, Borneo was one of the worst decisions travel decisions I have made. This is a negative review, but I am aware that there were some great things about the place such as the staff and the sunsets.

It was a string of indecisive decisions that led me and my friends to this lodge over the water. First we had been undecided about going to the area of Semporna due to the travel warnings (I don’t regret it for a second and would recommend the area to anyone, but do your own research. I talk about it on my Borneo Itinerary for 2 Week’s post). Once we had decided to go there we put off booking a place because we were under a delusion that we would find somewhere better than Scuba Junkies… after staying at Scuba Junkies for one night only, I can safely say there is no where better for budget and value than Scuba Junkies. Therefore, when we arrived on the island we checked in for our one night at Scuba Junkies and then hastily booked the next place we could find on Booking.com that was in our price range.

That night we thought we should orientate ourselves by finding the lodge before we had to walk there with our packs on. We walked up and down the village for over an hour and didn’t find it… it’s a small village… were we concerned? Not yet, we were on holiday! When we were due to Check-In one of their staff came and found us and led us to the Lodge… we would never have found it without our guide as it was completely unmarked. One look at our rooms and the bathrooms had us all back out in the village hunting for somewhere else to stay

The lodge is located over the water, which is pretty cool. Or it would be if a storm didn’t hit on our last night, convincing me that I was about to be washed away in my bed. You could also see turtles from the deck… as well as all of the rubbish. There is a lot of rubbish on the island as there isn’t a proper sanitation system for the island yet.

Now to be fair, our problem wasn’t so much with the state of the rooms, which were very very very budget. No, our problem was with how much we were paying. We were paying more per night at Star Mabul Lodge, which had some serious issues with its plumbing, than we had at Scuba Junkie, who had a giant shower and working toilet. I am not opposed to staying in some questionable venues, I just don’t want to pay more than in the resorts for the privilege.

There is also an etiquette to the island that we hadn’t realised. Each of the hotels, resorts and lodges serve their guests breakfast and dinner. If you dive there as well they will serve you lunch too. We didn’t realise this, and so headed out, without telling anyone, for dinner. Around 10pm, as we sat in another restaurant on the other side of the island having a cold pizza and beer, the lovely staff found us and asked us if we were coming home for dinner. I have never felt so terrible. They had been sitting there waiting for us to come home for dinner. We made sure we were there the next night, and always told them where we were going.

So in a nut shell what was terrible were the bathrooms! The pipe to the sink didn’t join with the pipe that would take it to the water below the house… so it went all over the floor. Same with the toilet, which either wouldn’t flush or would continually flush going all over the floor. The water was turned off and on at strange times, I completely understand that you may not always have water pumping through, as it requires a generator, but let your guests know when you will have it so we can be prepared. At one point the bathroom sink wouldn’t turn off and was just running, so they switched off the main water… but that meant when we wanted to use the bathroom we couldn’t flush. All of which would have been manageable if we hadn’t been paying more than if we were staying at Scuba Junkie whose toilets worked perfectly. Note: all thoughts are my own and my accommodation reviews are not sponsored unless otherwise stated.

Located on the island of Mabul which is in the Semporna Archipelago off the coast of Sabah, Borneo. It is based in the finishing village which is on the opposite side of the island to the major luxury resorts. It hangs out over the water and you have to walk on rickety board walk to get out to it.

I can stress enough how bad these were! So take my word for it.

There was no kitchen as the staff cook all of your meals for you. They were very accommodating when we advised that we had a vegetarian with us. The food was real local cuisine so it was a great experience! Remember to let them know if you aren’t going to be there for a meal. The staff were all very nice. There was a language barrier, which meant we didn’t know about them cooking dinner for us. I wish that some of the things had been explained in the confirmation email or when we arrived by the one guy who could speak English. I very much appreciate everything those ladies did to make us feel welcome despite us not understanding.