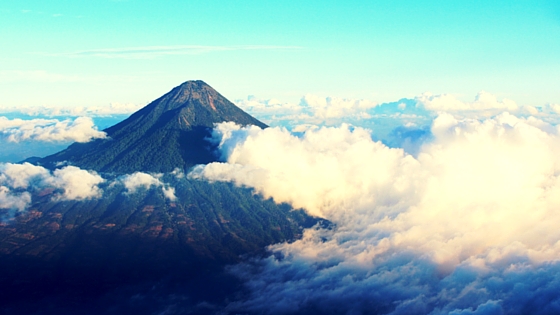 Guatemala is a country over spilling with volcanoes – nearly everywhere you look there is a peak sprouting up into the sky, often emitting a cloud of ash in its wake. As you travel around you will notice that nearly all of your fellow travellers have an opinion on if you should climb a volcano and which one.

To see a volcano up close and personal was one of the main reasons why I was so excited to travel a country like Guatemala, and they definitely lived up to their reputation. I was awe inspired by their size and power, feeling earth quakes and seeing lava flows gave me a sense of insignificance that I hadn’t fully had before. I was so inspired by them that when the question arose about whether I would climb one, the only answer was YES! If you are a yes as well, then here are some tips to make your trip a little bit easier. Some tips if you are about to climb a volcano: It was definitely an experience I will remember for the rest of my life, but it isn’t the volcanoes that are so firmly planted in my mind. No, my memories are going to be of altitude sickness, being covered head to toe in ash, exhaustion and meeting some of the most amazing, strong and generous fellow travellers to date. So a little good and a little bad – the volcano doesn’t feature as highly as the rest.

Before I start let me say that I am not normally a complainer. I hiked up the upper Yosemite falls track and back in 5 hours which left me unable to walk for days and I didn’t care, I have been awake for 48 hours straight as I made flight connections round the world – didn’t care one little bit. But this… this may have broken me a little. From Antigua, I joined a tour that would climb up the volcano Acatenango which looks across at the Volcano San Pedro and the constantly erupting volcano Fuego. Our tour had 14 people in it and only two guides. As a group we all pitched in to pay for someone to carry up all of our tents. Due to road works and general random delays we didn’t start the hike until 11am instead of the 8:30 start intended. From the very beginning it was hard work, there is no other way to put it – it is really hard. Stairs are in someways easier than walking on a permenant incline. It would have been ok if it zigzagged up the mountain and gave you momentary straight bits to stretch out your legs. Nope it was nothing but uphil for 5 solid hours!

So that you can judge how hard it is let me tell you a little bit about myself. I am in my late 20’s and have always been moderately fit. I play basketball and spend my weekends going on bush walks. Generally I walk to and from work as well and do the odd gym class once or twice a week. I try and eat healthy as much as possible but chocolate is a major weakness of mine. To put it simply – I am your average girl, with average fitness.

By the time we stopped for lunch I was feeling really nauseous. At first I thought this was due to my fitness level, but when it didn’t subside and got worse over lunch I realised it was actually altitude sickness. A very large part of me was screaming to turn around there and then, go back down and give up. I almost did. However, in my group was some amazing people – one guy took my extra water, another girl gave me pep talks, and another one just walked slowly with me for the next two hours. Problem was that due to the late start our guide was really pushing us to get to the top “faster, faster, faster” – every time he said that I wanted to either lay down and cry in a ball or throw something at him. I think by the end I hated him a little… Near the top, ash started raining down on us from Fuego. At first this was really cool, but then it didn’t stop and ash got everywhere including inside my camera lens.

Eventually though I made it to the top where thankfully our tents had already been put up. My nausea was completely draining as I was also simultaneously hungry. To compound it the air temperature dropped dramatically with the sun going down – so I was now nauseous, hungry, exhausted, covered in ash and freezing cold.  But being up the top of a volcano made it worth it right?

Maybe… I am still on the fence.

I shoved food down my throat as quickly as possible so that my stomach didn’t have time to refuse. As everyone else sat up around the campfire watching Fuego erupt, I climbed into my tent. If I regret anything about my trip it was doing that! Not only did I miss out on spending some relaxing time with some really amazing people but I only saw a couple of eruptions and took no photos before I went to bed. I regret that. The next morning everyone else got up to climb to the summit, there was no way I would make it up there, it would take me ten minutes to walk 20 metres away to find somewhere to go to the bathroom. Every step was torture. Instead I watched the sunrise from the warmth of my sleeping bag – it was spectacular and beautiful. I am not convinced that it would have been better from the summit.

Then came the decent. I actually found this a lot easier than I anticipated, primarily, because it didn’t require me breathing as heavily. My legs definitely hurt and my knees felt sore the next day but with each step downwards I felt like I could breathe a little better. At the half way mark I was suddenly gulping down air, after taking such big breaths and getting nothing, I was suddenly overwhelmed by how much air I could swallow. My mood changed dramatically, life was good again.

Reaching the bottom was as big of an achievement as reaching the top had been. But the best part was getting back to my hostel and having a long shower. Heavenly!