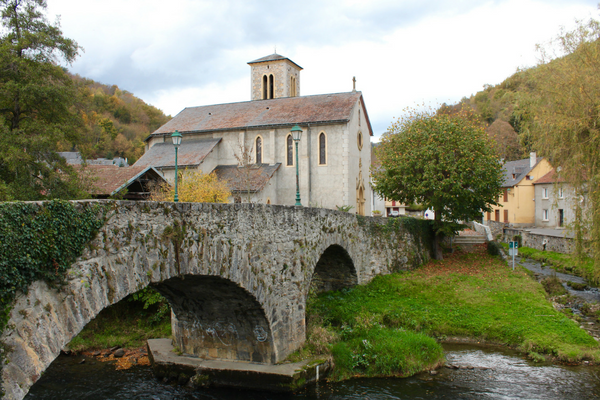 Escaping to the South of France for a week of relaxation wasn’t just great for the body but also amazing for the soul. Everyday I took myself out for a walk, sometimes I would visit mountain lakes, other times I would wander through the cobbled streets of historical towns and villages, each time falling a little more in love with this region of Europe. My favourite walk though, the one that has stuck with me many months after I have returned home, the walk that spoke to my inner wanderer was the time I followed the river Le Lez and ended up in the hamlet of Alas.

Alas, I was home. Every wander comes across a place like this from time to time, a place that they instantly connect with. For some it is an island of the coast of Thailand, for others it’s a yoga retreat in Guatemala. Wherever it is, it reaches deep into you and implants a deep love and appreciation for the moment you first saw it. I have felt this a few times before, once while I was sipping a strawberry smoothie at the night markets in Ho Chi Minh, another time while I was running for cover from the rain in Hong Kong, and when sitting eating tacos on a Tuesday in San Diego. I cant imagine that I am the first person to feel like this while going on a ramble in the South of France. With so many beautiful walks, lane ways and hamlets it’s hard to imagine why everyone doesn’t up and move to France to live out their days in perpetual relaxation. Seriously, why don’t we?

Going for a walk in the South of France

Waking up to the sound of goat bells as the Sheppard’s herded them in for their morning milk had become a staple over the week I had been staying in a château at the base of the Pyrenees. It was a sound that made me smile, so different to the sound of cars, trucks, phones, alarms and people that I was used from living in a highly dense area of Sydney. After a light breakfast of fruits that I had picked up at the local market, I packed myself a sandwich made from freshly bought bread and local meats and cheese, and headed out the door. On this day, I didn’t have a plan or a map for where I was going to walk. I decided to just let my feet do the leading and see where I would end up.

I headed through the fields to the river Le Lez to visit with the adjoining villages of Luzenac and Saint Martin, each straddling a different side of the river. The bakery was already closing up, having sold everything first thing in the morning. There were some farmers heading out to the fields and a postman driving recklessly round the cobbled streets he obviously knew too well.

I stuck to the riverbank and headed southeast. Sometimes the path was easy to follow, a well-worn track right next to the river. Other times I wandered along the road always looking for a way to be as close to the water as possible. I wasn’t taking the most direct route possible; constantly being side tracked by laneways or formage stands. After about an hour I entered the town of Engomer, a beautiful place… not much else needs to be said. Complete with an old fashioned mill that has been converted into a pizza restaurant. There were a lot of people out and about, chatting in the square on their way home from their morning activities. I popped into the local super market as I had forgotten to bring a water bottle with me (rookie mistake). I tried to use my very very basic French to purchase the water, luckily I must have stuck out like a sore thumb as they checkout assistant quickly took pity on me and switched to English to tell me how much the water was. I always try and use the local language if possible… I often end up doing more pointing and gesturing than speaking, I just feel it’s respectful to make the attempt.

As I was leaving Engomer I was placed with a choice, continue to follow the river or follow the road up into the mountains. Both were tempting prospects and promised beauty and spectacular scenes for me to bask in. I chose the river though because I was feeling a little lazy… if you have ever seen the size of the Pyrenees you will understand my reluctance to climb one when I wasn’t in the mood.

The next part of the walk was out in the open as I walked through a meadow along side the river. There were a few flowers out, but predominantly it was long dry grass that was changing colour. Against the back drop of the mountains it was heavenly. I reached a stone bridge with a sign saying that the village on the other side was called Alas. The moment I stepped onto the bridge to cross the river into the hamlet I felt that place-of-the-soul-feeling wash over me. I stopped and took a deep breath and just gazed at the beautiful place, wooden doors, slate roofs, flower boxes, water mill, and brightly painted shutters. It was perfect.

I spent the next half an hour just wandering around the village that probably only has ten streets, taking photos and admiring the architecture. I sat by the river and ate my sandwich, just feeling at peace. When it finally came time to leave I felt a sadness that was strange considering I was just going back to my amazing château…

On the way back, I felt as though the world was telling me to go back. Three times dogs came running out of farms to bark at me, putting my teeth on edge. In comparison to my walk on the way there, I didn’t see another person until I got home. I instantly missed Alas and the peace I felt during my short visit there. I don’t know if it was the place or the combination of a week of relaxation, a great walk in the morning sun releasing endorphins and the natural beauty of the place all merged together to give me that special feeling. I don’t really care; I will definitely be going back. Have you ever gone for a walk and ended up in a place that spoke to your inner wanderer, spoke to your soul? I would love to hear about it in the comments below. I may add it to my list of places to visit.