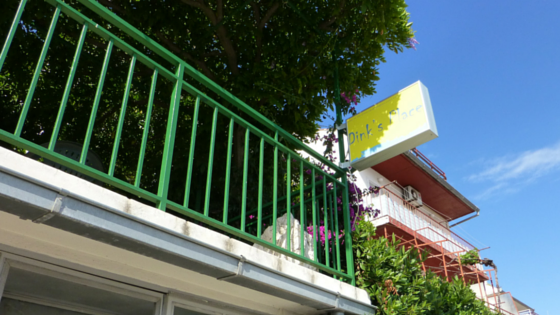 Good hostels are few and far between… great hostels are what legends are made of! Everyone has stayed at one great hostel which the will rave about and recommend the world over – maybe it was the people they met there, the staff or the location, or all of the above.

Whatever the “it factor” is, you will remember it as much as the most extreme activities, it becomes linked with the place and time.

On our little burst through the Croatia we decided to stop off at the paradise of Hvar, naturally we looked up Hostelworld to see what they recommended.  To our shock it seemed as though everything was booked out (we later found out that the music festival called FOR was on).  In haste we booked into the first available hostel that we could find – Dink’s Place. No sooner had my booking been confirmed than I received an email from Dink himself! Welcoming me to Hvar and giving me instructions on how to find the place – “if you can’t find it just ask someone if they know my father, they will point you in the right direction”.

Of course, I forgot to print out these careful instructions before I left, so we had no concept of which direction to walk in once we got off the ferry.  In the first travel agency that we found I asked for directions… Would they know is father as promised?

“Oh you are at Dink’s – he is my friend!” said the nice lady who was suddenly on the phone to Dink telling him we were on our way.  She also gave us a map and pointed out the route… up a hill – oh well!

Half way up we stopped for a breather and turned back to looking out over the city, we momentarily had doubt about which way to go, at that moment another friendly Croatian passed by – who of course knew Dink as well and pointed us up the hill further.  It seemed that Dink was just as popular as his father.

Finally, we found the place with its beautiful vine-covered patio. Peter, Dink’s father, showed us around and gave us maps with an air that was so relaxed that I immediately felt as though I was meant to be here for the rest of my life.

Our room was cool (not as in hip, as in temperature – which was a relief) and the beds huge and very comfortable. That evening once we had been for a swim in the crystal clear waters we sat out on the patio with a beer in hand to watch the sun set over the islands that were dotting the horizon.  Slowly our fellow backpackers emerged and joined in – before long we had a nice little family (though it has to be said it was predominately Australians… I think we are invading!) ready to head out for a drink.

For the party crowd Dink has an arrangement with Kiva bar that his guests get a free shot upon entry.  Which is always a good way to start the night if you are so inclined.  I, however, was ready for bed.

The next day we hired a car and headed off to explore the many wonders of Hvar – this blog is not long enough for me to tell all of the amazing things we saw.  When we got back to Dink’s Place our way was blocked by Dink and five friends lugging a vending machine up the stairs (a feat in its self) – it turned out that one of the guys was the same guy who had rented us our car earlier in the day!  Seriously everyone does know Dink.

Another night spent meeting people and watching the super yachts sail into town to disgorge the party goers, while we sipped wine and ate mussels by the water –  I felt like I had found a mini paradise and home in the middle of Croatia.

Unlike all of the party hostels in town, Dink’s was more of a family run affair which created an atmosphere amongst its guests to bond and hang out. And most importantly it was only ten minutes from quite possible the most amazing beach I have ever seen!!

I would name Dink’s place one of the Great Hostels I have stayed in.

Oodles of noodles! Loved going out with an old fri

Surrounded by history and new architecture… but

Oh my! What a weekend of wine tasting, cheese eati

Early morning walks along the beach and through th

Day three of hiking the Mare de Mare. It was mainl

Nothing beats watching the sunrise over the ocean