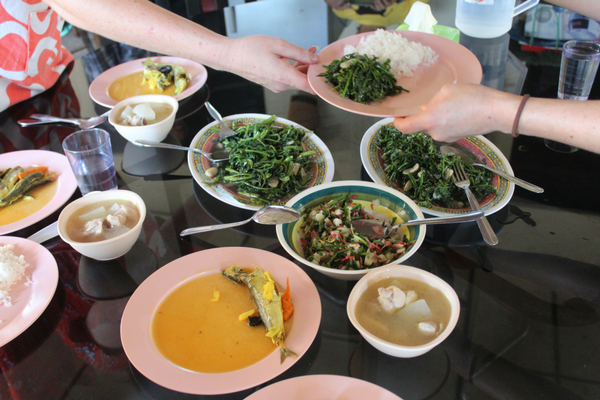 Doing a Borneo cooking class is a must for anyone who is visiting the island. It is a unique opportunity to taste and experience food that is authentically Bornean. I was staying in the district of Sabah on Borneo, which is one of the Malaysian sections of the island. I have always been a big fan of Malaysian food, but at times can find it heavy and stodgy. This Borneo cooking class showed me that not all Malaysian food is like that.

Our hosts were generous and informative. The dishes we cooked were ones that they make for their families. In fact one of our hosts explained that when the first started the course they had cooked the “tourist” favourites, but a travelling chef had been disappointed with the tour, wanting local food. So they had reshaped their menu to reflect what they cook on a daily basis, and by gosh is it delicious!

My day started with a short drive from our accommodation from Kota Kinabalu to a neighbouring town where the cooking class was hosted (all transfers included in cost). The tour officially started with a market tour.

After the market we headed to the family home to start the cooking portion of the Borneo cooking class! The whole tour went for about 5 hours including return transfer to my hostel. It was a fabulous day out which showed me a different side of Malaysian/Borneo cuisine.

I have a terrible confession to make here, I can’t remember either of their names, they were a husband and wife team who were lovely, but I missed their names when they introduced themselves and then felt too rude to ask them to repeat it. I feel like a truly terrible person.

Where: Kota Kinabalu, Sabah, Borneo
Website: A Taste of Borneo Cooking Class
Booking: Book directly on their website, or I booked through Viator, though you can also book through TripAdvisor
Cost: $75 USD

I have done numerous cooking courses around the world, and most include a market tour, but what set this one above the rest was the way we were invited to ask as many questions as we liked about the various strange foods. My host went into great detail on how to cook and prepare each item, and what they tasted like. My favourite part was when I was given a coconut to drink and found a coconut seed in the bottom… I had never seen a coconut seed before. I was then directed to eat it! It was delicious, who knew that coconut seed could be so tasty. What I Cooked at the Taste of Borneo Cooking Class

One of my party was a vegetarian, we hadn’t let them know in advance so they weren’t able to adjust the menu very much, though they did try their best. If you are a vegetarian or have any dietary requirements, I strongly recommend letting the hosts know in advance.

I loved the sauce for this dish, but I found the fish a little hard to eat on account of the bones. I am not very good at de-boning fish myself… it is something I should probably do a course on to get better. The fish did suck up the strong curry style flavours of the sauce, which as the fish is quite oily and meaty worked really well together. This was a completely new culinary experience for me. I had never eaten ferns before. Preparing them and tasting them was amazing. To be honest they tasted a little like bok choy, and soaked up all of the flavour of the delicious garlic and chilli sauce that went with them. I loved it for the novelty factor as much the flavour. By far my favourite dish. The broth was beyond delicious, I could have bathed in it gladly. It was very simple but some how packed so much flavour, I think in part due to the “seasoning” that they put in which sounded somewhat like chicken salt. The “melon” was a cross between a melon and a zucchini that had an interesting texture and flavour. Why you should do the Taste of Borneo Cooking Class

It was a truly great way to taste local cuisine which helped me when I was looking at restaurant menus during the rest of my trip. It gave me a grounding in what Borneo food should be like so I was able to steer away from the more peninsular style dishes such as satay. Pro’s: The hosts were absolutely fabulous and very friendly. They opened their home and discussed their lives, while taking the time to get to know me and my interests. The food was fantastic and as mentioned a different experience to what I had thought Malaysian food was.

Con’s: It is best if you have a group. I imagine if you were a single traveller you wouldn’t have the same experience or attention as I did as part of a group.

Check out my Ultimate 2 Week Itinerary for Sabah Borneo for more things to do and places to stay!

All about travel, food, friends, bushwalking and everything else outdoors

My face says it all. For those that don’t know m

Day one of the Bondi to Manly walk! Full of views

Out for a little adventure, snorkelling at Silver

I call this my Caribbean inspired lobster salsa! A